It looks bad when you have dark colored gums; isn’t it? The whole idea of smiling and laughing changes and the embarrassment you feel while widening your gums are too much to handle. Thus, getting rid of the gum pigmentation becomes essential for those who suffer from it. The gum depigmentation procedure is also known as gum bleaching procedure that is applicable in cosmetic dentistry for the pigment removal process of the gums. The lightening of the patches or removal of black spots is done by this procedure, the cause of which is the accumulation of melanin on them. The causes also extend to being high on certain medications for long. The procedure involves laser ablation technology .

The melanocytes present on the cells of the gingival epithelium produce melanin which is responsible for the discoloration or the dark stains on the gums. Through the laser removal techniques of the gum stains, the dentists use laser lights and target the melanocytes to ablate them. This continuous laser treatment helps in lightening the gums and reduces the melanin production which in turn keeps the gums light toned. After the laser depigmentation technique is executed, the healing process leads to the healing of the gingiva that continues to restore the original color of the gums for a longer period.

So, if you have pigmented or dark gums and thinking of getting rid of them for a long time, do consult the dentists at Dr.Balu Soman’s dental world who deal with such issues with expertise and care. They take care of your dental concerns and make efforts to heal them genuinely and without burning a large hole in your pocket. 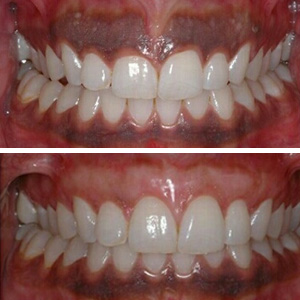